A Graduate's Dream Job: Helping Rats Save Lives
From VOA Learning English, this is the Health & Lifestyle report.
When people hear the word "rat," they may think of dirty animals that spread disease.
And if you are an English learner, you may also connect the word "rat" with bad expressions. For examples, calling someone a "rat" is a big insult and "rat race" describes a joyless, hurried way of living.
So, rats generally are not beloved animals either in life or the English language. However, the rat trainers at the nonprofit organization, APOPO, see the animals very differently. They consider the rats lifesavers.
Based in Tanzania, APOPO trains giant pouched rats to find landmines. And the rats with their extraordinary sense of smell are very go﻿od at the job. APOPO calls their animal team HeroRats. 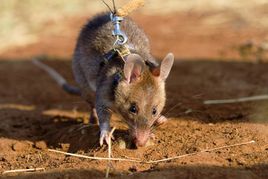 Saving lives
American Ellie Cutright is an APOPO trainer from Charleston, South Carolina. The researcher shared her very high opinions of rats in a discussion with VOA. She wants everyone to know how useful these animals are.
"Everybody should know that these rats, they're not stupid. They're not terrible animals. They're really intelligent and they can be trained to do some amazing things."
Humans have used metal-searching devices to do this work for years. But rats — it turns out — do it better. And they also cost less money. Cutright explains how the search process works.
"When the rats are working in the field and they find a landmine, they scratch on the ground and that's how we know. We place a little marker there, and then we can go safely remove those and get rid of them."
Once trained, the rats work in minefields in Tanzania and other countries around the world. APOPO estimates that worldwide there are 110 million hidden explosives left over from war. These explosives are still "live," or able to explode. Experts say such landmines kill or wound 5000 people a year.
APOPO says its rats have discovered more than 107,000 landmines and unexploded explosives, making life safer for almost a million people.
The giant pouched rat is large compared to other kinds of rats. However, they still do not weigh enough to cause a landmine to explode. Cutright praises the impact of their work.
"I think the work that APOPO does is really important in kind of spreading the word that rats are not just a pest. They really are heroes and they show us every day that they are worthy of that name."
Cutright says that she has loved rats all her life. She even kept one as a pet when she was young.
She also followed APOPO's Facebook site for years. During her last year of college, a job announcement appeared on the social media site. She applied and was hired. Cutright says that for her the position is a perfect fit.
And that's the Health and Lifestyle report. I'm Anna Matteo.