Study: Air Pollution Reduces Intelligence
From VOA Learning English, this is the Health and Lifestyle report.
Air pollution is a killer.
The World Health Organization says it kills an estimated seven million people around the world each year. Even if polluted air does not kill us, it can make us very sick.
However, breathing dirty air may do more than hurt your body. It can also affect your brain and your ability to think.
A new study shows that air pollution can cause a "huge" reduction in our intelligence. The study was a project involving researchers at Peking University in China and Yale University in the United States.
The researchers reported that long-term exposure to air pollution can affect a person's mental abilities in two areas: language and mathematics.
The researchers studied about 25,000 people from across China. Between 2010 and 2014, these Chinese men, women and children were given language and math tests. Then researchers compared the test results with measurements of pollution in the air, namely nitrogen dioxide and sulfur dioxide.
Xi Chen of the Yale School of Public Health led the study. He and his team found that breathing polluted air can reduce a person's education level by about one year.
Chen said that the effect generally is worse for those over 64 years of age, for men and for those with little or no education.
"The older persons — they are more affected. And we find, quite interestingly, males are more affected than females. And people working outdoors are more affected than people working indoors."
He noted that the youngest people in the study were 10 years old, while the oldest was 90. They came from 25 of China's 33 provinces. In his words, this range of ages and locations across the country provided a "good representative sample."
The researchers noted that the effect of pollution on verbal ability is even more serious as people age, especially among men and the less educated. 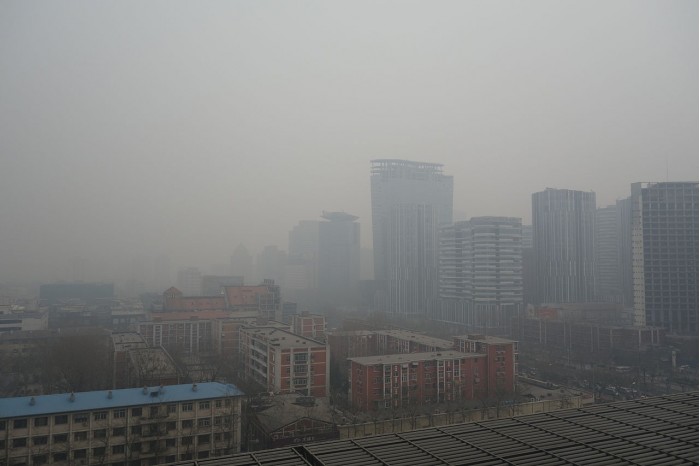 Why were language skills more affected than math?
Xi Chen told VOA that there are two main kinds of tissue in the brain: white matter and gray matter. White matter, he said, is more connected with a person's language skills, while gray matter is connected to our ability to solve math problems. Other studies, he noted, have shown that air pollution has a great effect on the white matter in the brain, but not the gray matter.
"Our findings are very c﻿onsistent with the hypothesis that the white matter is the key to explain this result. In our brains, we have two main tissues: one is white matter. The other is gray matter. And we know that gray matter is more responsible for people's math skills. But white matter is more related to people's language skills. So, that's why we find a much larger effect on language skills."
Chen said that air pollution did affect the math skills of the study participants, just not as much as their language skills.
The study was carried out in a single country. But the findings may be important to people all over the world, especially those living in highly polluted areas.
In May 2018, the WHO reported that nine of every 10 people worldwide are breathing polluted air.
WHO experts note that of the seven million deaths from air pollution, "more than 90% of air pollution-related deaths occur in low- and middle-income countries in Asia and Africa.
In 2018, the WHO found that India had the world's 14 most polluted cities.
The study we described earlier found that people who work outdoors fall into a high-risk group. However, that does not mean those who work inside buildings are safe from air pollution.
Researcher Xi Chen spoke about the smallest pieces of air pollution, called particulate matter 2.5 or simply PM2.5.
These particulates are only 2.5 micrometers long; sometimes they are even smaller. So you can easily breathe them in, and they are found indoors.
"Everyone is actually affected. And there are some studies already showing that the very small particulate matter can go directly into the brain affecting office workers. So, no matter whether you stay outdoors or indoors, everyone is affected. Some studies show that PM2.5 – which is very small particulate matter — 70 percent of outdoor PM2.5 can go directly into the building."
Chen urges government policymakers to make serious changes.
"So, the longer term affects suggests to the policymakers that we need to engage in cleaning up the sky instead of investing in short-term avoidances, for example the face masks or air filters."
Xi Chen and his team reported their findings in the Proceedings of the National Academy of Sciences.
And that's the Health and Lifestyle report.
I'm Anna Matteo.